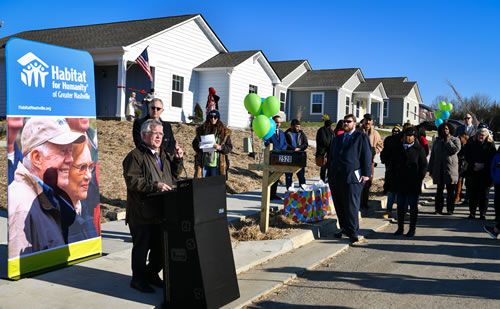 In January 2021, Mayor Cooper convened an Affordable Housing Task Force to bring forward recommendations for policies, funding and programs that could create significant impact in the near term. The task force report is now available. Housing is considered affordable for a particular family or individual if it costs equal or less than 30% of their income. For example, for a family that has an income of $60,000 annually, housing that costs $18,000 per year ($1500 per month) would be considered affordable. Thus, whether a particular housing option is affordable is relative to financial position of the family or individual in need.

“Affordable housing” is housing that is affordable (30% or less of total income) for households that earn 60% or less of Davidson County’s median household income.

“Workforce Housing” is housing that is considered affordable (30% or less of total income) for households that earn more than 60% but less than 120% of the median household income. Thus, in 2014 for example, workforce housing in Davidson County was any housing that was affordable for a 4-person household earning between $36,044 and $72,089.

Income limits is the system by which the U.S. Department of Housing and Urban Development determines whether a particular individual or family qualifies for one of their housing related programs. See this spreadsheet for the 2019 Income Limits Summary for Nashville-Davidson-Murfreesboro-Franklin, TN. These limits are based upon income medians for a 10-county region which includes Davidson County.

A grant is a sum of money given by a granting entity, referred to as the grantor. Government grants are the largest subsect of a broad funding pool comprised of both private and institutional grantors. Government grants are usually created by legislation and allocated out of a larger public budget, for a particular purpose. Generally, a grant is available to an entity that meets certain qualifications and has a work scope that meets grant criteria for funding. For example, in the affordable housing context, a grant might be made available for the purpose of supporting a community’s homeless population. A nonprofit in the community may then apply to receive the grant based on their programming needs and design for purposes like create housing options for the homeless. In Nashville, the Barnes Fund for Affordable Housing provides grants to nonprofit housing developers to create and preserve affordable units.

The Barnes Fund is committed to addressing housing needs specifically for individuals and families at or below 80% of the Area Median Income (AMI). The Fund makes competitive grants to nonprofit housing developers to increase affordable housing options for Nashvillians. Grants include funding for renovation or construction of affordable homeownership and rental opportunities and other supportive efforts to encourage affordability. Funds can be leveraged by nonprofit developers with other existing tax credits, capital campaigns, grants, and other funding opportunities.

The Low-Income Housing Tax Credit program (LIHTC) gives state and local allocating agencies the equivalent of nearly $8 billion in annual budget authority to issue tax credits for the acquisition, rehabilitation, or new construction of rental housing targeted to lower-income households. The funds are used to incentivize developers to invest in affordable housing projects that otherwise would not be profitable. The low-income housing tax credit gives investors a dollar-for-dollar reduction in their federal tax liability in exchange for providing financing to develop affordable rental housing. Investors’ equity contribution subsidizes low-income housing development, thus allowing some units to rent at below-market rates. In return, investors receive tax credits paid in annual allotments, generally over 10 years. Financed projects must meet eligibility requirements for at least 30 years after project completion. In other words, owners must keep the units rent restricted and available to low-income tenants. At the end of the period, the properties remain under the control of the owner. Learn more about the Low-Income Housing Tax Credit process.

The Tennessee Housing Development Agency was created by the Tennessee General Assembly to promote the production of more affordable new housing units for very low, low and moderate income individuals and families in the state, to promote the preservation and rehabilitation of existing housing units for such persons, and to bring greater stability to the residential construction industry and related industries so as to assure a steady flow of production of new housing units. In addition, THDA also issues tax-exempt Mortgage Revenue Bonds to support financing opportunities for first-time homebuyers and veterans.

The Mayor’s Office works closely with the Homeless Impact Division; Metro’s planning and coordinating entity that brings advocates, nonprofit organizations, for-profit business leaders, government agencies, and the general public together to collaborate on solutions of homelessness in Nashville.