Metro’s Outdoor Tornado Warning System began with a federal grant in 2002, and has become better, bigger and broader. Between late February and the end of April 2013, 20 new sites were added, going from 73 to 93 locations countywide. Each siren is located in public gathering places selected by city planners on the basis of outdoor population and population density.

Funded with $2 million in local capital improvement dollars recommended by Mayor Karl Dean and approved by the Metro Council, the entire system was also upgraded with new siren equipment that emitted an easier-to-hear warning signal, which is more like an old air-raid warning rather than the mechanical tone previously used. The expanded, upgraded system makes the coverage area bigger and broader across Davidson County.

The new Outdoor Tornado Warning System will operate on a Polygonal Alert model. This model will provide warnings to a focused polygonal alert area based on information coming directly from the National Weather Service.

The Outdoor Tornado Warning Siren system is to help those in outdoor areas be aware that a tornado warning has been issued for any portion of the county.

A Tornado Warning means a tornado may have been indicated on Doppler radar or a trained spotter has spotted a funnel cloud or tornado in progress. The entire system remained ready at all times, with both signals ready to be used during the construction and upgrade period.

This web page provides the information you need about how the system works, a map of current and new siren locations and how the new siren signal (and the old one) sounds. All sirens are tested at noon on the first Saturday of each month and silently tested daily internally by the system itself. Other than tests, the sirens are only activated by the National Weather Service when NWS issues a Tornado Warning for a portion of Davidson County.

When the sirens are activated: 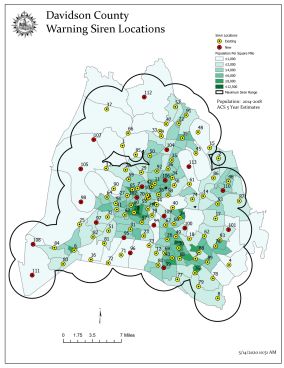 Nashville/Davidson County has been a StormReady community since 2000!