Recognizing the need for a uniform national set of crime statistics reliable for analysis, the FBI’s Uniform Crime Reporting (UCR) program was developed in the 1920’s. It is reported that the first UCR document in January 1930 reflected data from 400 cities in 43 states, covering more than 20 million individuals, approximately twenty percent of the total U.S. population. In 2009, law enforcement agencies active in the UCR Program represented more than 295 million United States inhabitants—96.3 percent of the total population. As a result, the function of crime analysis became more widely accepted.

The study of crime reports, arrest reports, and calls for police service were all used to identify emerging patterns, suspects, and trends as quickly as possible. The analysis of this and other data to determine relevant factors, to sometimes predict or forecast future occurrences, was of great benefit in issuing analytical reports or intelligence bulletins to various elements of the department. Using such reports, managers at all levels can better develop effective strategies and tactics to address crime and disorder.

The Metro Nashville Police Department has compiled and reported crime statistics in the UCR or traditional summary format since the City of Nashville and Davidson County governments merged in 1963. A modern crime analysis function has existed within the MNPD since 2000 and, with the advent of mobile data computers, automated field reporting, and other advances in technology, continues to evolve.

The Metro Nashville Police Department collects and reports data in both the FBI’s Uniform Crime Reporting (UCR) program and the National Incident-Based Reporting System (NIBRS). These two reporting methodologies collect a vast amount of material that can be accessed by the general public, researchers, media, and others regarding the levels of crime in the United States.

NIBRS based data is reported to the Tennessee Bureau of Investigation. We choose to publicly disseminate crime data in the UCR format. In the United States, UCR crime reporting has existed since the 1930’s. Nashville has voluntarily participated in the UCR program more than 40 years. The UCR Program collects data on known offenses and persons arrested by law enforcement agencies. The UCR Program collects offense information for murder and non-negligent manslaughter, forcible rape, robbery, aggravated assault, burglary, larceny-theft, motor vehicle theft, and arson. These are Part I offenses and are serious crimes by nature and/or volume. These serious crimes are the immediate focus of police activity. Other crimes, such as embezzlement or kidnapping for example, are crimes which immediately come to the attention of the police for investigation but are not typically crimes that occur in patterns or trends, or occur so infrequently that they are typically not benefited by the crime analysis and Compstat process; therefore they are handled on a case by case basis. Thus, the UCR Program limits the reporting of offenses known to the eight selected crime classifications because they are the crimes most likely to be reported and most likely to occur with sufficient frequency to provide an adequate basis for comparison.

Although the TBI provides statewide NIBRS data to the FBI, the FBI also chooses to continue reporting national crime statistics in the traditional summary format – also known as the Uniform Crime Report (UCR). The FBI converts NIBRS statistics, submitted by agencies that report crime data via the NIBRS format, to the traditional UCR summary format and incorporates them into the national crime database. In 2009, approximately 44 percent of the Nation’s law enforcement agencies participating in the UCR Program submitted their data via NIBRS, and the crime data collected via NIBRS comprised approximately 26 percent of the data submitted to the FBI. As a result, the conversion of NIBRS to UCR crime counts is not completely accurate since differences exist between NIBRS and UCR reporting guidelines and offense definitions.

Both NIBRS and UCR involve agencies completing detailed reports and investigating crimes. The UCR program reports summary data for each incident, while the NIBRS program gathers more detailed data on each crime. Therefore, the MNPD collects data in both formats. By recognizing the benefits and limitations of each data set, the MNPD maximizes those factors to develop its internal crime analysis reports as a tool for department managers. The NIBRS format data offers a significant benefit as an analytical tool. However, the usefulness of the UCR summary format in narrowing the focus of police resources in order to respond to crime patterns and trends in a timely manner, along with the ability to make historical data comparisons, makes the UCR format the most appropriate crime statistic reporting tool for most purposes.

It is important to note, however, that the reporting format (UCR vs. NIBRS) has no effect on how police respond to individual crimes, investigate those crimes, or conduct follow- up investigations. The reporting format, and the differences within each, simply provides different analytical tools to the crime analysis process.

The Metro Nashville Police Department collects and reports in both the UCR and NIBRS formats. The UCR format is more concise and therefore conducive to “indexing” or making comparisons over time in Nashville and in comparing Nashville to peer cities.

We report crime in the NIBRS format to the Tennessee Bureau of Investigation, available at: Tennessee Crime Statistics .

The FBI reports these comparisons (and the limitations of such comparisons) on its website at: FBI Uniform Crime Reports

Internally, the Crime Analysis program uses both the UCR and NIBRS formats to analyze crime and develop planning tools. These analyses are published internally to the department as a management tool so as to aid supervisors in developing strategies to address crime and quality of life issues. 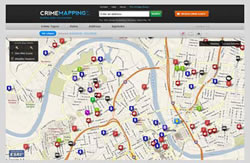 CrimeMapping.com utilizes advanced mapping software, which helps the MNPD provide a user-friendly and flexible tool for citizens. Crime data is updated on a regular and timely basis from the department's Records Management System. This data is verified for accuracy and all address information is generalized by block in order to help ensure privacy is protected.

The Crime Alert feature is one of the most popular of CrimeMapping.com. Citizens can register online to receive free e-mail updates whenever new crime activity occurs in a specified area. A person can register multiple times in order to learn about criminal activity near their residence, business, workplace or even their child’s school.

Citizens and community groups will have instant access to important and timely crime information affecting their neighborhoods, empowering them to proactively partner with officers to address problem areas.

The site maintains current information with new data uploaded into the system every 24 hours. Incident information used is thoroughly tested for accuracy.